Our department main research field is Nuclear Magnetic Resonance (NMR), a phenomenon whose principal application is Magnetic Resonance Imaging. Over the last thirty years, this method has established itself as one of the highest performance medical imaging methods. More precisely, we are studying the behaviour of nuclear magnetic relaxation of water protons in the presence of magnetic nanoparticles. Indeed, the contrast of MRI pictures is strongly influenced by the presence of magnetic particles. Some particles are endogenous, i.e. naturally present in the human body, whereas others are exogenic, i.e. injected into patients to obtain a better contrast. Examples of endogenous magnetic particles are ferritin and hemosiderin, which are iron storage proteins, whereas magnetite nanoparticles (see attached electron micrograph) are used as exogenic contrast agents. 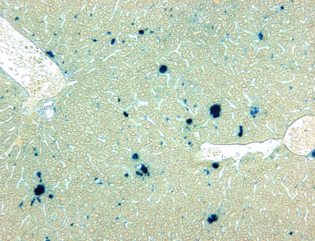 Ferritin consists of 24 sub-units constituting a spherical shell inside which iron is stored in the form of a ferrihydrite crystal (5 Fe2O3- 9H2O). This crystal is antiferromagnetic. With MRI, the presence of ferritin in an organ is thus translated into a dark surface on T2-weighted images . This phenomenon is well-known for the liver, the spleen and the extra pyramidal nuclei of the brain. Opposite you can see a histological analysis of mouse liver tissue showing an iron excess (Perl’s blue staining carried out by the Department of histology of UMONS). 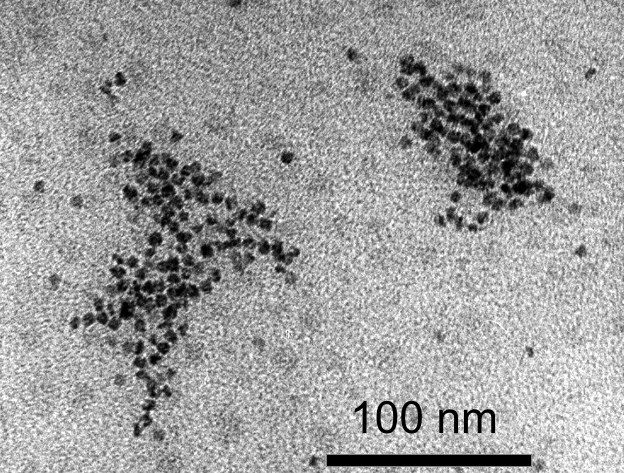 Ferritin agglomerated by the action of trypsin, transmission electron microscopy. It was proven that this phenomenon of agglomeration influenced the relaxation times considerably and thus also the MRI contrast of iron loaded organs. 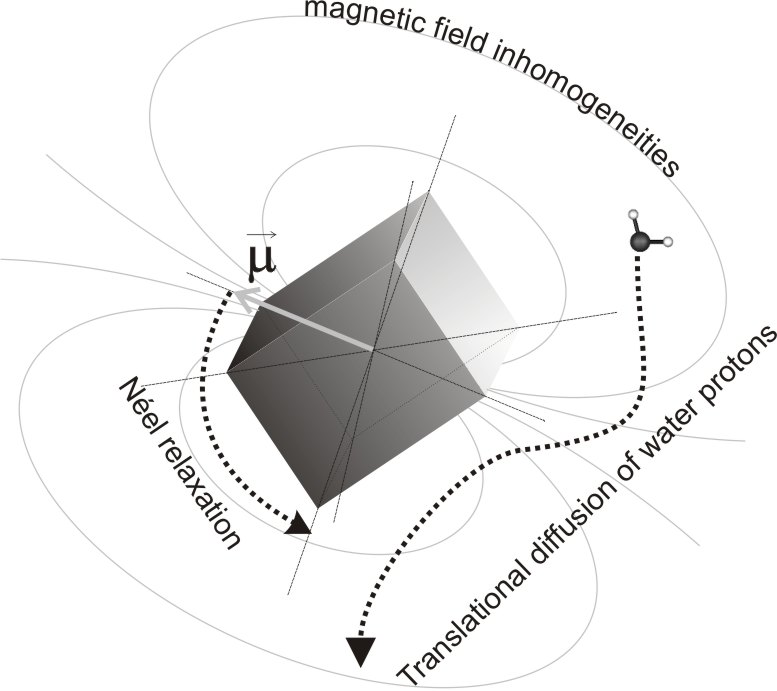 We also work on the characterisation of magnetic nanoparticles (by NMR, by magnetometry, and also by other techniques), and on the development of theoretical relaxation models in the presence of magnetic compounds. Potential implementation of this research is the use of noninvasive iron content measurement methods by MRI and the development of new contrast agents.

Computer simulations of the relaxation induced by magnetic particles are also performed in our department. They make it possible to study the influence of various parameters (size of the crystals, agglomeration, external magnetic field,…) on the effectiveness of the magnetic nanoparticles. The whole of various aspects of our Research (characterization of the particles, simulations and theoretical modeling) makes it possible to determine the optimal properties of these compounds in order to make them efficient contrast agents for MRI. Below the influence on T2 of the size of nanoparticles of maghemite is represented, results obtained by simulation. For more details see:

The second figure shows the good agreement between the outer sphere theory and the experimental relaxation results obtained on new samples and with data from literature. This graph is presented in a publication : 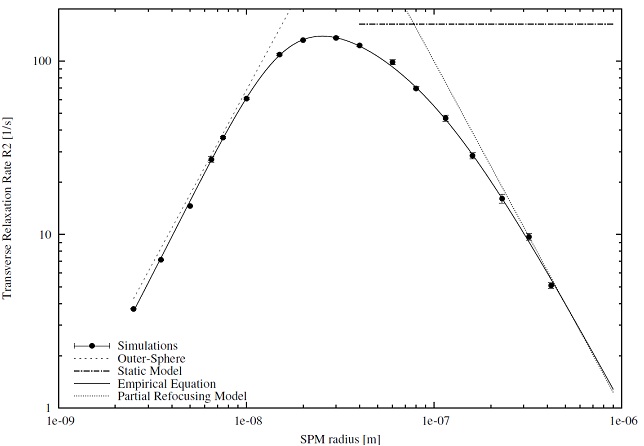 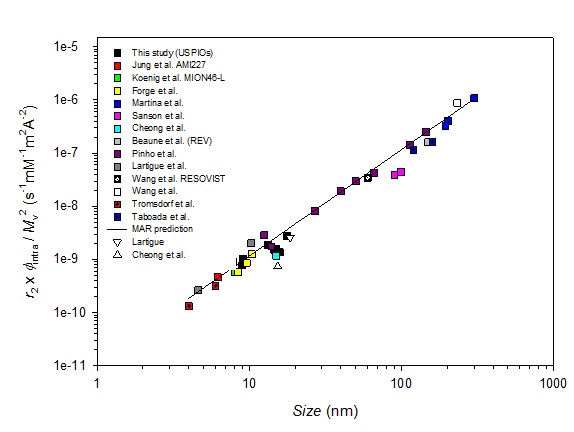 In short, our research includes:

4 relaxometers (10 MHz – 20 MHz – 29 MHz – 39 MHz) used to measure protonic relaxation times from 0.24 to 0.96 Tesla.
1 Molspin Nuvo vibrating sample magnotometer, working on a field ranging from 1 Tesla to +1 Tesla.A precision magnetometer working in a range of temperature and magnetic fields.Access to computation clusters for simulations.
We also have access to some of the NMR Lab equipment of the University of Mons, with which we collaborate. 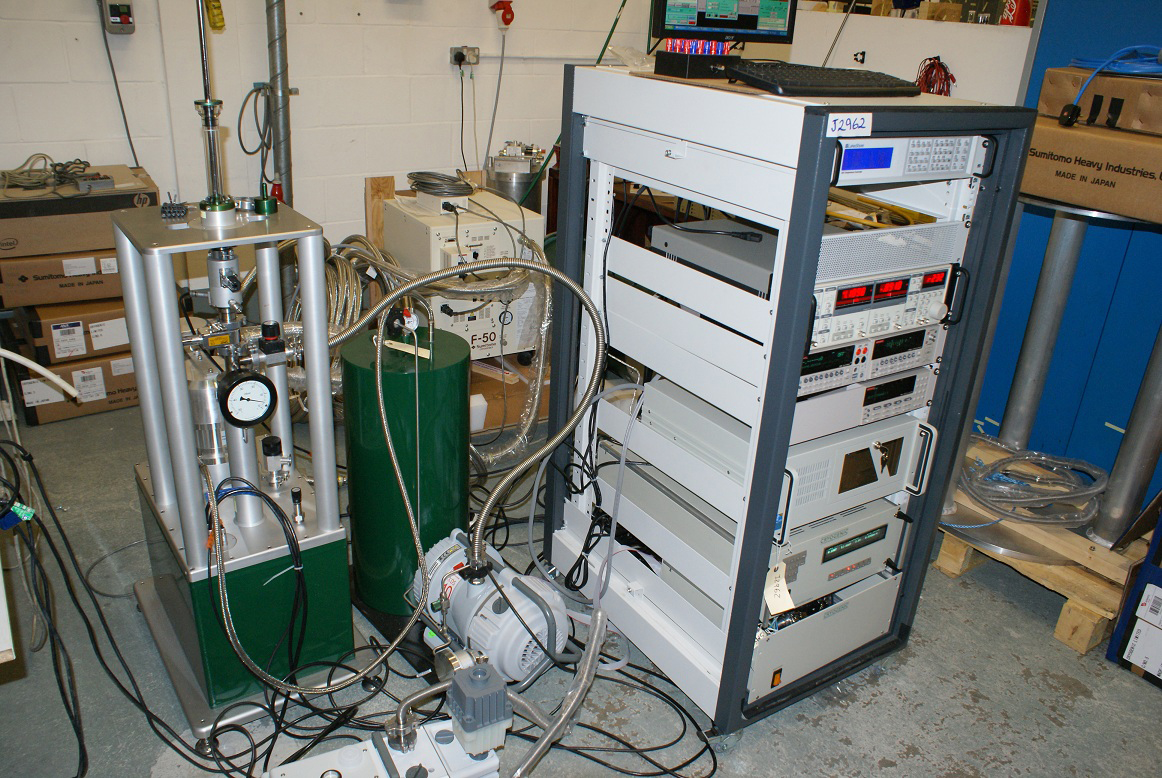 Various national and international collaborations with physics and chemistry laboratories.

To get an outline of our research, please consult the  publications’ list of the department.

Our service is also associated with the following UMONS research institutes :