Back to all news
Written by Florence Laline
The UMONS Faculty of Engineering (FPMs) is particularly proud to have Mr. Mahmoud Nani, 31, a Syrian refugee, among its new graduates. He now holds a Master’s degree in Computer Engineering and Management with a specialist focus on Information Systems Control. 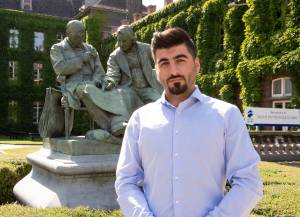 On Saturday 14th September 2019, at the graduation ceremony of the UMONS Faculty of Engineering (FPMs), Mr. Mahmoud Nani was the first refugee student to officially be proclaimed Engineer. The panel decided to reward his efforts by bestowing him the ENG’UP® prize!

Following the second session deliberations and the announcement of results on Friday 6th September 2019, the FPMs is particularly proud to have Mr. Mahmoud Nani, 31, a Syrian refugee, among its new graduates. He now holds a Master’s degree in Computer Engineering and Management with a specialist focus on Information Systems Control.

“As Dean and Vice-Dean respectively, we, Professors Christine Renotte and Véronique Feldheim, can only rejoice in Mahmoud’s success. During his time at the FPMs, he demonstrated exemplary motivation and acquired the scientific and technical skills necessary for his future engineering profession. He also worked on developing his personal and professional plans. A wonderful example of our ENG’UP® “Create and Create” training philosophy. Our Faculty has played its true role to society well. Well done, Mahmoud!”

Mahmoud Nani was born in Syria on 5th January 1988, the second of four children. He grew up in Aleppo and started his higher education studies there in 2005-2006, as he had always dreamed of becoming a computer engineer. The revolution in his country would change that.

He left his country, crossed the border and ended up in Turkey, where he lived for a year, working odd jobs in restaurants and hotels (14-hour days!) and learning Turkish and English! His family stayed in Syria and he regularly sent them money. Due to his very busy work schedule, it was impossible for him to resume his university studies.

By following the news, he heard about the waves of refugees making their way across Europe, and that several European countries had policies in place to welcome refugees (e.g. Germany and Belgium, among others). He then decided to come to Belgium, all the while maintaining his objective of finishing his university education.

He was then welcomed at the Fedasil centre in Morlanwelz. Then it was waiting game. Meanwhile, he used his foreign language skills to help other residents of the centre, serving as their translator. He also helped those seeking housing. It is by the greatest chance that one of his friends told him that a UMONS professor, Mr. Safar, came to the centre to present the University’s Refugee Student Welcome Programme. Mahmoud immediately made an appointment and got the ball rolling to register on a Master’s programme.

He began his academic journey at UMONS in 2015-2016 as an auditing student, mainly taking French classes. The year after, despite the language barrier, he registered for the Master’s degree. The secret to his success, you wonder. “Study, study, study,” he says.

Despite taking 3 years to finish his Master’s (he followed a complementary programme at the beginning), Mahmoud finally found the environment where he admits: “I could be me”. The second in a family of four children (the eldest is a mechanical engineer, his younger brother works in construction, and his younger sister is in her fifth year of dentistry studies), he has finally reached his goal.

The new graduate is happy to have met teachers who treated him the same as everyone else and who were able to identify his potential and encourage him on his journey. He still remembers the first words of the Dean who welcomed him and who simply told him “Welcome to Belgium”. He really was lucky to find such a welcoming university.