The engineer, a vision with a future

From the École des Mines to the UMONS Faculty of Engineering

In 1836, on the proposal of Jean-Baptiste Thorn, second governor of Hainaut after Belgian independence, the provincial council of Hainaut recognised the need for the Province to promote the training of engineers able to exercise the various industrial professions of the time. Our coalmines, blast furnaces, rolling mills, glass factories, potteries, refineries and confectionary factories were growing at a steady pace and the industrial zones of Hainaut were undergoing a transformation. At a meeting on 21st October 1836, the Provincial Council decided to create a “Provincial Mining School of Hainaut” in Mons. The royal decree of 27th September 1837 placed it under the control of the Permanent Delegation and, on 1st November of the same year, declared it open on premises allocated by the City of Mons. Annual appropriations were allocated by the Province of Hainaut and the City of Mons. The first courses of the Provincial Mining School of Hainaut (1837-1838) took place on the first Monday of November 1837

rest of the story…

They were young engineers, they were graduates of a great engineering school, and they were called Alphonse and Théophile. However, young engineers are no longer known by just their first names, and for good reason…

It was the year 1837 and the provincial government of Hainaut decided to entrust Théophile Guibal and Adolphe Devillez with the responsibility of organising the course programmes of the newly created Provincial Mining School of Hainaut.

These two young engineers were from the Ecole Centrale des Arts et Manufactures de Paris, founded eight years before. On the first Monday of November 1837, together with two other colleagues, they welcomed their first students, who began a course of study fixed at two years in duration. The school saw its first four graduates in 1839.

Directors, Administrators, Rectors and Deans who became head of the Engineering Faculty of Mons from 1837 to the present day 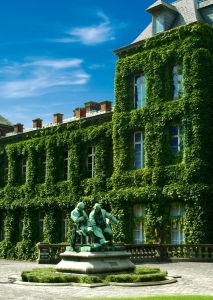 The Collège de Houdain was originally a college of humanities, founded in 1545 by the Magistrate of the City of Mons. Located in the old garden of the Houdain Hospital, the current building dates back to the first third of the 18th century, and was designed and rebuilt by architect Claude-J. de Bettignies, who also designed the belfry of St. Elizabeth, between 1735 and 1739. The original wing is crowned by a perforated belfry and dormers.

As it was integrated into the same building as the Hospital of the Holy Spirit and the Bureau de Bienfaisance (charity office), the college became referred to as the Holy Spirit. Following the closure of the college in 1794, the building was then occupied by workshops. The École des Mines took it over in 1878 and it was then that the central part and the current right wing were built by the architect Hector Puchot.

The bronze monument by L. Devillez was installed in 1902 in the centre of the courtyard, and represents Guibal and Devillez, the founders of the École des Mines.

Today, the former Collège de Houdain is part of the UMONS Faculty of Engineering (FPMs). A vast and imposing building, set over four floors, some of its main features include a ground floor adorned with a beautiful gallery of nine semi-circular arches, and a remarkable cast iron and granite staircase from Soignies.

In addition to being the historic site of the Faculty, these buildings house a museum space.