The engineer, a vision with a future

Honorary Doctoral Degrees Awarded by the Faculty of Engineering 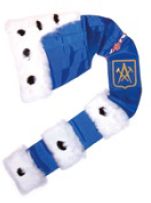 Honorary Doctoral Degrees (Doctor Honoris Causa) are awarded according to a specific procedure. They are awarded to exceptional people who have made a notable contribution to their domain, or to a particular institution. The main criteria for being awarded an honorary degree relate to the integrity of the person in question, and the recognition of their work by their peers. We can find holders of Honorary Doctorates in all fields, whether it be in arts and letters, in science, in human and social sciences, in philosophy, etc. Since 1988, the Faculty of Engineering has awarded 34 internationally renowned personalities with honorary degrees.